So, I’m as bad as a network season finale cliffhanger for that last post, am I right? “I’ll post tomorrow,” I said. It’s only been (counts on fingers)…it’s been more than “tomorrow.” My bad. I have excuses, but most of them are flimsy and since y’all all WHEN YOU GON’ UPDATE, sit your Bellatrix selves down for the rest of the #PhilippinesAdventure.

You’ll recall that day 1 in the Philippines, was, to use the colloquial, a shit show. I was seriously looking into tickets back to Korea that night, but I didn’t want to face the peanut gallery of “WHY DIDN’T YOU JUST GO TO EL NIDO I TOLD YOU I TOLD YOU I TOLD YOU” and since I am a dumb woman who repeatedly forgets that pride goeth before the shit falleth, I couldn’t have that.

I asked my new AirBNB host, Nick, for some advice, and what I got was advice AND DINNER, y’all. At a place that was like “The Hangover,” pre-hangover. 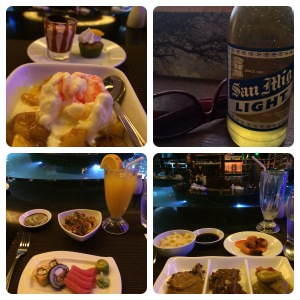 AND HE PAID. Yes, y’all. This dude definitely paid more for my dinner than I paid at his hotel. And it was crazy delicious. He (and his business partner) both recommended that since my first choice place of Sagada was supposed to be raining all week, I should try for Baguio, which was “just 5.5 hours away.” 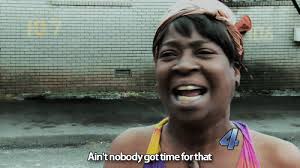 My main goal in this unplanned trip to the Philippines was to relax and unwind and just be around green things, which, in a nutshell, was what it was like in Jeju for me just 5 days before, and they assured me that Baguio was like that, and they had contacts there. So I folded myself in half in a tricycle, YES a trike, and went to the bus station. I then proceeded to think “don’t pee don’t pee don’t think about peeing you definitely don’t have to pee, you’ve never peed in your life” for the next 5.5 hours, which I am sure my sister the nurse would not be proud of.

Watching the scenery go by, I saw more and more green, making my heart excited. However, I’ve got to tell you guys that the ratio of Celine Dion songs I heard to hours I spent on that bus was just unreal. I was in love with the guy next to me by the time our ride was finished. Upon arriving to Baguio, I checked into my new AirBNB place and promptly got rained on. But the view, even in the rain, was magnificent. 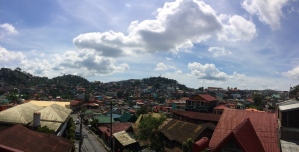 Originally, I’d just planned on staying 2-3 days in Baguio, and getting ideas for somewhere else. But, like all places, there were people that changed my mind. My new AirBNB place was hosted by Robert, who was convinced that his dog, Bruno, was reincarnated and could tell bad people (barking) from good people (no barking), and that since Bruno and I got along like gangbusters, I was a good egg. Just look at this fool, who clearly has superpowers. 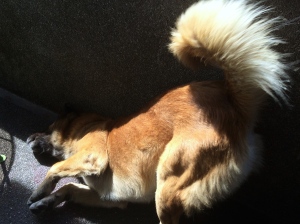 Robert fed me, answered questions, and let me just chill and be myself on his balcony for hours. I also met 4 girls who lived in the house–they are from neighboring provinces and are in Baguio for jobs/training/schooling for a temporary time, and they are awesome–they took me to night market, to bars, on walks, and got me to eat new foods, all while chatting and talking about life. They completely made my trip worth it.

I ended up spending 5 days in Baguio–and I have to say, I never anticipated in my life being crammed into a Toyota 4 Runner taxi with 4 Filipino girls, eating corn kernels that were coated with macaroni cheese dust out of a plastic cup, and rocking out to “Gangster’s Paradise.” Sometimes when you just let the journey take to the weirdest places, it treats you to pretty wonderful experiences. 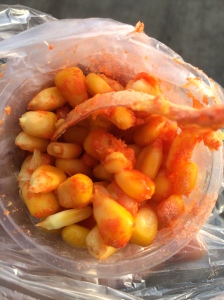 -The night market–at 11pm they close down one of the main streets in Baguio for a clothing, shoes, and trinkets free for all that is manic and wonderful and super cheap. You should all know that I really restrained myself in not buying you all vintage Nike tees. And then I ate some weird foods that I’m still not sure about. 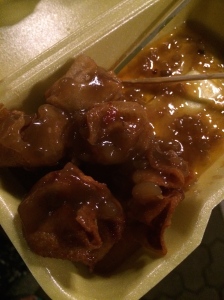 -Maryknoll Ecological Sanctuary–aka one of the weirder things I did in Baguio and I…I’ll just show you some pictures. This is touted as a garden, and as I was here to see green things, it seemed logical…To start with, this is how this starts: 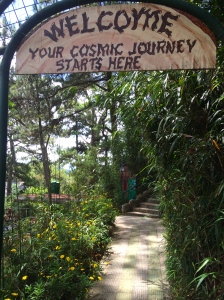 YES. Am I right?! I  swear, if there was just a weed scent, this would be right at home in the Pacific Northwest. This place/garden has a “history of the world” theme, and it did not disappoint with the weirdness. There were dinosaur eggs, mini-caves, and even weirder religious motifs. I wished so bad that RoyGene had been there to livetweet it with me, because it was glorious. Also, there *were* beautiful flowers, but I was too lost in the hilarity of strange.

-Mines View Park–WE DON’T NEED NO STINKING BADGES to look at a bunch of hills that once had mines that produced valuable stuff. Not the most exciting pit stop, but a cool view indeed.

-The Mansion–aka where the President goes to get away from the oppressive heat of everywhere else in the Philippines. I know it looks like the gates to Arkham, but I swear this is the summer white house. 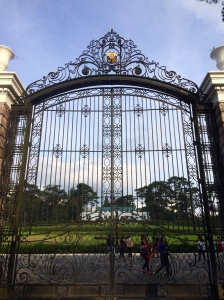 I returned to Korea, a little wiser and with mostly healed cheesy thunder thighs, and missing the one guy who knows me inside and out: Bruno. I mean, seriously, look at this fluff basket. He knows what’s up. 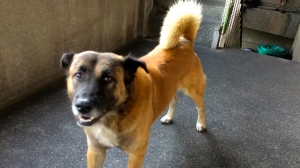 So if you go to the Philippines, either 1) plan better then I did or 2) just go to El Nido already and you’ll probably love it. I don’t regret going on my journey of strange, as it’s made for some awesome and horrific stories but I could have saved a lot of hours and several inches of chewed of fingernails if I’d planned better. But the Filipino people made my trip a glorious bag of experiences and for that, I’m pretty damn grateful.

Next post: How to end your job , by Not Me, #JapanAdventure and OWLS. Yes, Anderson Cooper, OWLS.