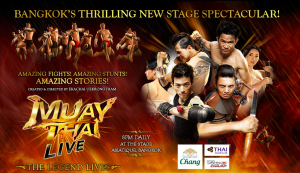 So I decided since work on my CELTA is finally lightening up, to treat mahself and go see a show or two this weekend. Sometimes you have to accept that living the dream is going and doing stuff even when you’re alone, which can be daunting to a single white female in a huge, notorious city like Bangkok.

I don’t remember where I heard about Muay Thai Live: The Legend Lives (MTL:TLL?), but I decided to shell out for the premium seat (about $40) and go with no expectations and see how it went.

It went gloriously. I first had to find a Bond villian’s underground ticket office off the Hwai Kwang subway stop on Friday to pick up my paper ticket since the email said I couldn’t pick it up at the central office on the day of the event (STOOPID). Then yesterday the boat shuttle from the condos didn’t run at 5pm like it’s supposed to (ALSO STOOPID) and I had to catch a cab to the BTS to a free boat shuttle to the Asiatique, this huge mall area with the stage.

When I got there I wandered around buying everything under the sun for about 2 hours; surprisingly fun and usually cheap stuff. Then I found my way to the stage, which I had thought was outdoors according to promo pics, but was actually indoors, thank Jesus for air conditioning.

My seat got a free upgrade and I sat next to 2 guys from Singapore who giggled with me the whole time. See, this thing is like 13 super ripped dudes and 1 girl (who plays like 3 damsel-in-distress characters) running around in booty shorts actually hitting and kicking and ass-whooping and actually whooping and COMING OUT OF THE FLOORS, GUYS. There were holes in the stage, the stage split apart at one point to like, loose the souls of hell, there was crowd involvement…I have never been to Medieval Times, but I imagine it must be similar.

7:47-8:17 A tiny, badass old lady in chunky heel red boots talks in Thai about starting MT franchises. This is super, butt-asleep-in-church boring, but there are 14 cameras that I can see, so I keep a polite, strained, constipated foreigner smile on my face. She ends her speech with the image at the bottom of this post and all English speakers let loose a half-hidden snort.

8:18-8:22 Some gifts are give to the old woman by some middle-aged guy in a suit. No idea why, but if they’re giving out free gifts I could attempt to smile bigger or pull down my v-neck shirt. Y’know. Whatever.

8:23-8:25 Our “host for the evening” is introduced over the loudspeaker as she comes out in traditional wear, whining in baby voice about how if she was pretty we would clap louder. I live in Korea and already have 2 ovaries, thanks very much, so I am not moved by whining and am inclined to not clap and I let fairies die everywhere.

8:26 The booming god voice announces “MUAY THAI LIVE: THE LEGEND LIVES!!!!!!” and the lights go down. There is an impressive amount of coordination of the the many screens on par with megachurch levels to announce that we are in 16xx year (I don’t remember, there were too many glistening chests to remember) in a kingdom called Ayutthaya and then you hear loud boy whoops not unlike when the cafeteria opens or youths on bicycles in the Buttercream Gang want to scare a girl, and about 12 scantily clad boy/men run out calling to each other, play-fighting, running down the stairs of the audience to the big square stage (see map at the bottom).

I immediately start quietly laughing because every.single.one of these guys is ripped as heck and is doing their best to authentically play-fight and laugh and involve the crowd and I hurt for them doing this like every night. What must it be like to do this and then come back down from it and like, buy antacids at the 7-11?

Anyways, ACT 1: involves these boy/men discovering the beginnings of Muay Thai and they all play fight each other until some dude walks in to the screen splitting in two like a damn stargate and fights them all and wins and then they all realize HOT DAMN THIS DUDE IS THE TIGER KING and he came to fight the mere mortals IN DISGUISE. Someone call J.Lo because I think Maid in Manhattan is like, getting copyright infringed on.

ACT 2: 17xx (again, glistening chests are distracting) in Ayatthaya has some poor dude who’s like a master fighter all chained up in some pseudo-colosseum and they free him to fight like 8 different opponents who start COMING OUT OF THE FLOOR OF THE STAGE LIKE NINJAS (but not ninjas because this is Thailand and we are not racist about “all Asians”) and there’s like twins with murder axes and HE DEFEATS THEM and then a drunk guy who fights with/for his jug o’ booze and then a tiger guy like comes out of the audience stairs (not *down* the stairs, like the platform opened out the halfway up the stairs and he slithered [yes, slithered] out and cat screamed like 3 feet from me) and he beats him too and then finally he gets the thumbs up from Joaquin Phoenix and is allowed to leave.

ACT 3: Also 17xx but later-ish, some warrior and his clan of 4 vs some other clan of 4 and their legendary fighter and OH MAH GAWD WARRIOR A’S CLAN HAS A DISGUISED WOMAN AND IT’S *HIS WOMAN* and she tried to help and SPOILER ALERT: dies to spur him on to kill everyone else. He falls on her prostrate body and sobs a bit like this is Outlander or something (PS: this actor cannot be only Thai, the whole time I actually thought he was a white dude with a bad dye job and a spray tan, but at the end he had a Thai name so I’m thinking he’s mixed) and carries her limp, toes-perfectly-pointed body out.

ACT 3B: all the dudes come out and perform the kata? Is this the right word? Anyway, they show the 12 moves/form of Muay Thai off and badly lipsync the overhead voice that calls out the names; it’s like Who’s Line with the subtitle game.

ACT 4: modern day, we see a scrawny kid in painted-on black jeggings and black converse with a black t-shirt and black blazer bound up the stairs. He looks at the kata chart and pretends to do some moves. She of the whiny voice saunters on stage and teases her boyfriend (of 5 years, according to the English translation on screen) of liking Muy Thai better than her (GOOD CHOICE, BRO). Bro assures her that’s not true and get’s down on one knee to prove it with a tiny red box. We fade over to just her subconcious that jumps up and down and squeals “YESSSSS” and go back to her complaining “I don’t believe you love me if you’re proposing in the alley like a dog” or something (RUUUUUDE, GIRL THAT BOY IS HOT AND HAS PUT UP WITH YOUR WHINY VOICE FOR 5.LONG.YEARS). He then reminds her (and us) that his dad is chief of police and they probably shouldn’t be in the alley since “they’ll be coming for us soon.”

This is called foreshadowing, kids, and it took all of 14 seconds for him to walk 2 steps away and run his hands through his luscious locks and the bad guys kidnapped April and the Turtles came…jk jk but really she got taken because the bad guys CAME IN ON ROPES FROM THE CEILING and took her back up and (what was his name? crap. Something basic. But Thai. This dude only knows one color, anyways. Let’s call him Mike.) Mike is like “whaaaaaaa? where is the whiny love of my life” which then starts his sequence of fighting everyone on his way up to the big boss (seriously just like a video game, including some ladders work not unlike Super Mario Bros.), who he defeats. He discovers Whiny trapped in the floor like a 18th-century ship stowaway and asks again if she’ll marry him. She says yes, he puts his blazer on and someone offstage throws her a sarong and they ride some gondola thing up into the ceiling saying “thanks for coming to our wedding” and she throws her plastic flowers to some old dude in the audience and shouts “YOU’RE NEXT.”

And SCENE: credits roll and the 15-ish actors come out in their costumes on stage and then say thank you and bow and then rinse and repeat that 3x to all the different areas of the stage and we clap for about 3.56 minutes and then get up.

God’s voice comes back to remind us that the actors will be available in the lobby for photoshoots in about 5 minutes. I try to decide if I want to debase myself in taking a photo with more muscle mass than a Gold’s Gym, and decide to head out. But then as I’m walking towards the stairs, I hear repeated shouts of “HA” again and again and the crowd is slowing down and I realize that the actors are shouting before every.single.picture to like truly hold their poses and muscles. I’m impressed and decide “no one I know is here to be embarrassed of me,” “I’ll never see these people again” and “JUST DO IT ALREADY, YOU BIG BABY” and use my LC basketball elbows to slowly work my way to the front. I’ve already decided that the big bad video game boss was the hottest, and he’s standing on the side of the cast with his enviable body in just jeans and half-zipped leather jacket. When the photographer finally decides it’s my turn, I grab him by in the arm and pull him to the middle (where I’m supposed to stand) and all his co-workers are whistling and giving him hell and I’m laughing and then HE TOOK OFF THE LEATHER JACKET AND…

and they’re all cheering and I’m cheesing and we took a photo and I bowed and he bowed and then we unfortunately did not ride into the sunset together because it was 10 o’clock and the sun had set and if there’s one thing I’ve learned watching drag shows, it’s that you’re unfortunately not allowed to touch the talent unless you’re handing them money…and I’d kind of already given him money by buying a ticket. I ran down the red stairs and into his dreams.

Then I decided that I probably wasn’t gonna get another chance, so I decided to ride the huge Bangkok Eye ferris wheel and when I got to the front the guy said, “just one” and I said “just one” with the biggest, shit-eating grin on my face. And then I saw the world from up there and it was magnificent. 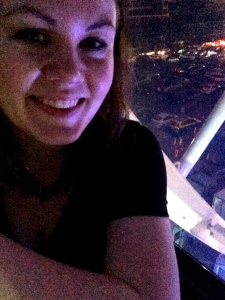 In review, MTL:TLL was a great experience; I would definitely recommend it to someone who wants to see Muay Thai…but doesn’t want actual blood to happen. I was thoroughly impressed at these guys and their level of fitness and professional technique. According the website they are all stuntmen and/or former MMA/kick-boxing/MT champs. I know it’s scripted, but those hits were most definitely connecting. Clearly they aren’t at 100% full strength, but the muscle memory required to fight 8 different people for 20+ minutes at a go and choreography fighting is happening with 10 other people with weapons on the stage is pretty impressive. As is the commitment to fully ham it up and act in front of a couple hundred people, screaming and hyping it up genuinely. I’m pretty glad I went; and not just for the photo. Although I’m pretty loyal to my boxing family, Muay Thai looks pretty dang cool. Now, if only I could just STAY CLAM, I could Muay Thai onwards!