I got naked this weekend. And I wasn’t alone. Myself, a co-worker and about 200 other women took off all our clothes to get in another state of mind: relaxed.

Korean culture is well-known for it’s bathhouses or jimjilbangs; spas where you can spend hours in hot (or frigid) pools with healing properties, or sweat out your body weight in saunas and specialized rooms.

The lesson I learned and my mantra:

The day began with Annie, Carrie and I catching the KTX from Daegu to Busan, about a 45 minute train ride for $15. Since this was just a day trip for Carrie and I, it was worth it to arrive around 10:30am. We met Annie’s past college roommate, and exited the metro to enter the Shinsegae Department store: by Guiness Records, the largest in the world.

On the 1st floor of Shinsegae, we navigated around the outlets for luxury goods–Chanel, Louis Vuitton, Balenciaga, Givenchy–none of us could afford to walk on those tiles. We entered “Spaland,” where our rest began.

Being that this was my first jimjilbang experience, I learned that after paying the $15 entrance fee, you remove your shoes and put them in a locker. You then take the key and continue to a desk, where they give you 2 hand towels and a uniform. Next, you go to a locker room, and it’s time to get personal. You take off all your clothes, putting them in a second locker and can either go in the buff to the baths or put on your uniform and enter the specialized rooms.

A note about nudity: I thought I was fine with it. I have no qualms walking around naked at home, in my room, and was ok with the idea of naked. I had no. idea. what I was in for. There’s a special breed of trust between co-workers when you go to a jimjilbang together: you agree to never speak of the naked, you try not to look at the other person’s naked, and most of all, try not to touch their naked.

Anyways, Carrie and I decided to start with the baths; we walked out fresh as newborns into the baths, and straight into the judgemental stares of every ajuma (older lady) ever born in Korea. EVER. It’s like walking into a meat factory. The best thing is, though, everyone is naked. There’s no hiding it–you just gotta own every jiggle and mole and zit and strut it.

The pools are labeled with their properties and temperatures, so we floated through a couple, deciding on a balmy 37C one and sat, letting our muscles relax. An ajuma wandered over to let me know that I needed to put my hair back up; it’s rude to have it just floating in the pool. All that was communicated through hand gestures and head shakes and shaming sounds–making great impressions! After this, we decided to wander (this place is massive, by the way) and discovered a sauna–we chose the “cooler” 76C one. I think I maybe made it 5 minutes before I said, “uh uh,” and pulled the bucket of 18C water over my head and dashed out.

The outdoor (covered) area was my favorite–we sat buck nekkid on lawn chairs and talked about life for 20 minutes, just feeling the breeze ruffle our bits and cool off from Hades/sauna life. Then it was back in the baths, and I saw a sign for a “scrub.” Intrigued, I peeked my head around the corner and saw a woman curled up in the fetal position, being ravaged by a ajuma in mittens, clad only in black panties and bra in what really seemed like a prisoner of war situation. Confused, I turned to Carrie, who assured me it was actually pretty great. So we signed up for one (do not worry. I’ll get back to this.)

Next, we clothed ourselves and visited the public areas, where men and women together can sit in various specialized rooms, like the Yellow Ocher Room (good for “women’s illness”) and the Pyramid Room (shaped at 52 degree angles, and hot as blazes). 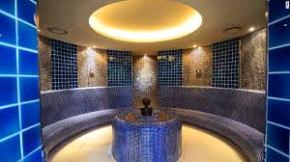 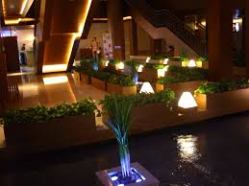 We checked out about 95% of the rooms–theres about 20 of them and then it was time for the scrub.

Step 1: An old ajuma comes and collects you by hand and pulls you over to a hospital-esque bed. Remember, you’re buck naked and she’s in just black bra and panties. There’s about 7 other stations in the low-ceilinged, poorly-lit bat cave you’ve voluntarily entered where other naked women are in various stages of scrub/hazardous waste detox.

Step 2: Ajuma gestures in broken English for you to lie facing “sky” and shut your eyes. You feel vulnerable, but do as your told, remembering your “be cool be cool BE COOL” mantra. She then rubs some weird stuff on your face and pours a bucket of warm water over your body.

Step 3: The Scrub. Ajuma has on what amounts to sandpaper mitts, and goes over your body like a chef seasoning a dry rub on a chicken. She is…very thorough. It’s pretty much everything but the Pap Smear. I swear to you, she could tell me if I had a lump in my breast, she went over them so many times. You turn on one side, and then another, and then on your front. She went over the v-lines, the inner thigh and I know the dark side of my moon wasn’t spared because I had to actively think “DON’T CLENCH” in that moment. I opened my eyes a few times, but the sight of more naked and the social stigma of “looking” got me to stop real quick.

Step 4: Ajuma pours a few buckets of water over you, then a loofah with the softest, angel wish light as a feather caresses something over you. You are a cloud. You are a baby just being birthed. You have no skin and it feels wonderful. Then the buckets, then, she slaps each butt cheek once and pronounces, “feeeeeneeeeshed!”

You stand, slowly as she gestures towards the door. You walk out, wincing like a mole into the brightness of the baths, and sink your lobster-red body into a cooling pool while wrestling with the fact that you just paid money to be sanded down by a mostly naked old woman who’s name you don’t know due to language barriers.

Then, you prison shower next to 20 other nude ladies and go put your clothes on, emerging back into the world without making eye contact, and go in search of sustenance and 3 gallons of water.

A note about jimjilbangs: they are amazing. I paid $15 to get in, and opted to pay $20 for the scrub/facial and that’s it. $35 wouldn’t get you past the front desk in the US. Sure I sacrificed some dignity (and probably some basic human rights afforded me by the UN), but it was a great cultural experience, and I’m glad I did it (and that Carrie was there to guide me). I believe they provide a valuable service that we don’t get in the US: the opportunity to be open about bodies. Nudity is so scandalous in the states. And while I’m all for modesty and appropriateness, it’s refreshing to see so many “who cares?” looks on women’s faces in the spa. Everyone has something–a mole, hair in normal and not normal places, sagging somethings, scars, bruises, zits, baldness–and I think it would really help girls and other women to see that. So often we’re alone with our bodies, wondering “is this normal?” and that shouldn’t be. Korea is an extremely image-conscious society, but once you’re in the sanctity of the jimjilbang, there’s no secrets. It gives you a certain confidence to just shimmy around in nothing but what God (and all those Diet Cokes and Sonic runs) gave me and I actually found it really empowering.

That said: I was not ready for all that jelly. Everyone is looking at everyone, and I was no exception. At one point, I wondered where I was supposed to look. Everything is stone and rocks and oh-my-god-is-that-your-vagina-near-my-face-BE-COOL-BE-COOL-BE-COOL. So it was an experience, to say the least.

We spent the rest of the day shopping at H&M and roaming the over-populated Haeundae Beach, which was littered with the detritus of thousands of beachgoers and seagulls. We headed back to the train station, where I got to try my first Japanese beef bowl:

Relaxed, sated and happy, we caught the KTX to Dongdaegu, the train to Waegwan, a cab to the village, and the smooth-as-newborn-baby butt to bed.

One thought on “The Butt Naked Truth About Busan”